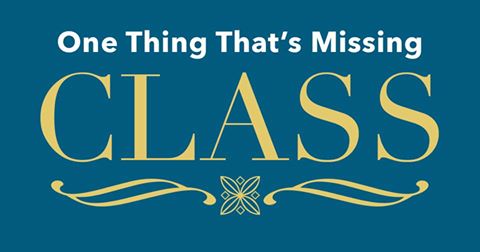 I can’t help but notice the missing trait among some entrepreneurs, and it’s CLASS.

The are some people that have so much CLASS and operate that way naturally that you can’t really put your finger on why you are inspired by them, YOU JUST ARE. Because CLASS is something that is accommodating and usually not disruptive in a negative way.

The word CLASS has been been tainted because more people associate it directly with wealth and social stature than with politeness, civility and respect. It’s a shame really.
I remember this scene from a movie when someone explained why manners are so important. It’s not because you want to act like you’re better than everyone else, It’s because you are showing respect to the people around you.

If you watch some of the old movies from the past you’ll see it loud and clear. And for some reason it resonates with almost everyone.

CLASS is not an exclusive club, there are people on the street that have more class than the people in the penthouses. For example a homeless man in Manchester U.K. running to the aid of victims of Monday’s terrible incident. That guy has nothing, and yet still gave; because class is beyond worth but is tied to values. The way a stranger values another persons life and well being.

How this relates to business and entrepreneurs; well it’s simple, you either want to help people or you don’t. If you don’t then your motive for profitability is probably lacking some CLASS. I don’t know many high end coaches but I did get the chance to go to see #RayHigdon last fall and I can tell you from what I’ve seen of him ever since there is coach with class and I respect him. I can say the same for a lot of the people I know that have been coached by him.

In present day there’s not a much CLASS as there use to be, or NEEDS TO BE! There’s something good about showing some CLASS, maybe there is even a premium on it. There is class in so many different forms. I see it in a lot of my friends and clients and I appreciate it so much.

We can all use a little more class in the world and show it as a sign of respect for each other. Even in business.

Share with us your experiences when CLASS made the difference for you or those around you.. Leave a comment below!